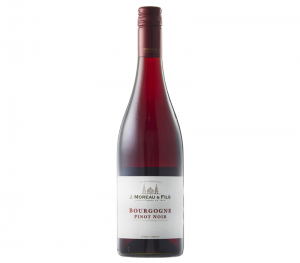 Already cultivated by the Gauls at the time of the Roman conquest, this important grape variety goes far back in the history of the vine in France. Mentioned for the first time under the name “Pinot Noir” in 1373, it is also known by the names of “Franc Noirien” or “Plant Fin” in the Côte d’Or, and “Franc Pinot” or “Petit Vérot” in the Yonne. It has made a reputation for itself among the red wines of Burgundy where it is vinified alone or blended with 15% Chardonnay. In Champagne, it is blended with the Chardonnay or Meunier varietals. Introduced to the Loire region in the Middle Ages at the same time as Chardonnay, it became established in the Orléanais and Touraine regions and remains the red varietal of the red and rosé wines of Sancerre.

– the grapes were harvested both by machine and by hand
– de-stemming and crushing the pomace was left in the must during alcoholic fermentation with daily pumping-over and temperatures maintained at 28° – 30°C
– the free-run and press juices were separated
– malolactic fermentation was sought after aged for 10 months.
– 10% of the cuvée was aged in oak barrels with a maximum proportion of 25% new oak.

Cherry red in colour tinged with garnet.
Raspberry and blackberry on the nose with notes of spice (clove and cinnamon).
Delectable on the palate, round attack with fruit flavours reminiscent of blackberry, sour cherry and liquorice. A touch of smoke and spice typical of this wine’s terroir. Structured, well-integrated tannins.